Ethanol is an alcohol fuel made from the sugars found in grains such as corn, sorghum, and barley.

Most of the fuel ethanol used in the United States is distilled from corn. Scientists are working on ways to make ethanol from all parts of plants and trees rather than just grain and are experimenting with fast-growing woody crops such as poplar and willow trees and switchgrass to see if they can be used to produce ethanol.

Ethanol is blended with gasoline

Nearly all of the gasoline now sold in the United States is about 10% ethanol by volume. Any gasoline-powered engine in the United States can use E10 (gasoline with 10% ethanol), but only specific types of vehicles can use mixtures with fuel containing more than 10% ethanol. A flexible-fuel vehicle can use gasoline with ethanol content greater than 10%. The U.S. Environmental Protection Agency ruled in October 2010 that cars and light trucks of model year 2007 and newer can use E15 (gasoline with 15% ethanol). E85, a fuel that contains 51%–83% ethanol, depending on location and season, is mainly sold in the Midwest and can only be used in a flexible-fuel vehicle.

What is biomass-based diesel fuel? 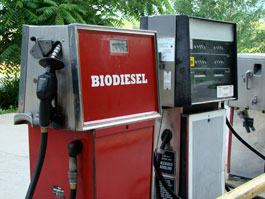 A biodiesel and standard gasoline pump