Return on investment from wind turbines 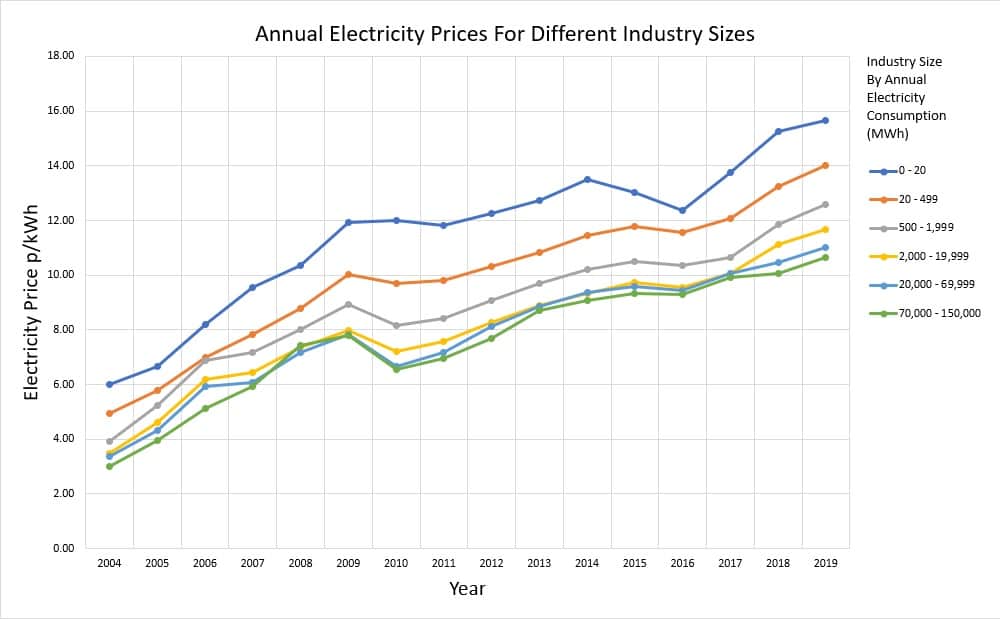 The Return on Investment of a windpower scheme depends on the net income received and the capital costs of the project.

Determining the income is complicated, it depends on:

These figures are complicated because of the uncertainty in the rising cost of electricity. The graph below shows historical prices for non domestic electricity between 2004 and 2019. The data for this is provided by the UK government department, BEIS here.

This shows an annual average electricity price rise between 2004 and 2019 of approximately 9% per year. Future changes to electricity prices may not follow historical price rises and are very hard to predict because they are heavily influenced by fossil-fuel prices and government policy changes in response to market conditions and carbon reduction commitments. 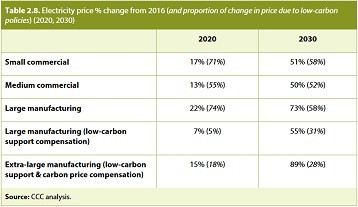 The last assessment of Energy Prices and Bills made by the Committee on Climate change was in 2017, and their report is here. Their assessment of the impact of carbon reduction commitments made to 2017 show price rises of approximately 3% per year to 2030 as shown on the right. The UK government has since increased its commitment to carbon reduction which would mean that investment in low carbon energy will inevitably have to increase beyond that shown in this report. Please note it is possible that electricity prices may rise or fall in the future.

For illustration purposes, the Rate of Return for three scenarios are shown below. This assumes a typical lifespan of 25 years for wind turbine equipment. The wind system’s returns on investment shown are realistic for typical, viable sites:

The table below shows what the Internal Rate of Return (IRR) could be for a range of wind turbines with annual mean wind speeds ranging from 5 to 8.5 m/s, where 100% of electricity is consumed on site and there is an assumed annual price rise of the cost of electricity of 3%.

Unless the commercial operation is a 24 hour, high energy use operation, or energy storage is added, then it is likely that only a portion of electricity generated by the wind system can offset on site electricity usage. If only a proportion of electricity can be consumed on-site, this scenario is complex and depends on electricity consumption and generation patterns over a period of time. Renewables First can assess this demand and generation relationship as part of the Windpower Feasibility Study service. For illustrative purposes, we will assume that 50% of electricity generated is consumed on site, and 50% is exported to the grid.

The table below shows what the Internal Rate of Return (IRR) could be where 50% of electricity is consumed on site and there is an assumed annual price rise of the cost of electricity of 3%.

100% exported to the grid, annual export price rise of 2%

Finally, if it is not possible to consume any electricity on-site, then 100% of the electricity must be exported to the grid. A typical initial export price of 6.5 p/kWh, which increases annually by an inflation rate of 2%, is used for this Rate of Return illustration:

Clearly the potential return on investment is very good especially if energy can be used on site, but always remember that wind projects can take two to three years to deliver and that there is no guarantee that a project will succeed until planning consent has been obtained.

The first step for any wind project is a good quality wind feasibility study which will analyse everything in detail, identify any potential project risks and recommend the best way to proceed with the project.